An Interview and Game, with Daniel Clausen and Harry Whitewolf, Authors of “ReejecttIIon – a number two (Rejection #2)” 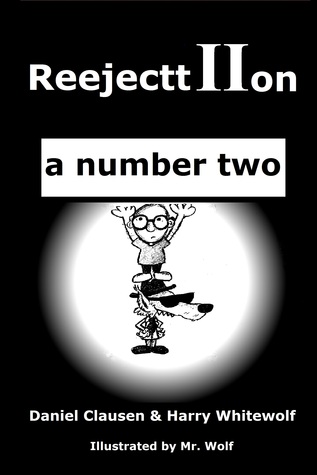 After spending some time under the unreasonable theory that Daniel and Harry were actually the same person, I recently interviewed the mysterious duo behind this collaboration, and convinced them to play a made up version of the Newlywed Game, convincing myself, that they are in fact two separate (and talented and funny) people. Read on.

When did you start writing and why?

HARRY: I’ve been creative from an early age – making art, coming up with stories and writing poetry. I remember I wrote love poems to a girl in my class when I was only eight years old. I don’t feel like I’ve had a choice as to whether I write – ideas are always there, and when the muse demands to be heard, I listen. I never plan to write any of my books – they just arrive one day and force themselves out of me. Having said that, I’ve only taken myself seriously as a writer and decided to publish in the last few years.

DANIEL: I was very young: elementary school. I started writing these stories in one of those Mead hardcover composition notebooks. I then gave them away to family members for Christmas. Some of my early classics include: Teenage Alien Turtles with Machine Guns and Optimus Prime Fighting for Survival. Later, I would pen the classic “Treasure of New Mexico” that included all my friends in it. It was a hit in my fourth-grade class.

How did you meet and decide to collaborate on ReejecttIIon #2?

HARRY: I was working as a waitress in a cocktail bar when I met Daniel.

HARRY: Actually, we found each other’s work on the online book site Goodreads. Daniel read my Route Number 11 book and gave it a fabulous five star review. Not only that, but he really ‘got it’ and picked up on what I was trying to do with the mixed up travel tale. Either shortly before or after that I read Daniel’s Ghosts of Nagasaki. It was the best indie book that I’d read, and it still is.

We got to know each other better through reading one another’s books than  we could have ever managed through online small talk [alone]. After striking up an online relationship, and after I had read Daniel’s first Reejecttion book, he asked me if I would be interested in collaborating on a Reejecttion sequel.

DANIEL: Quite by accident. I think I read and reviewed Harry’s book “Route Number 11.” Then he reviewed a few of my books. He asked me if I was going to write another Reejecttion. I think I replied that I probably wouldn’t unless some people wanted to help me with it (I didn’t think I had enough material  or energy at the time).

What attracted you to his work?

HARRY: You know how you read some books that seem to come fully formed with little room for improvement? It was like that with Daniel’s Ghosts of Nagasaki. This wasn’t someone trying to write, this was clearly an author that had to write, which is surely the hallmark of all good authors. Read his  work and you’ll see why I hold it in so much esteem – it’s funny, fresh, sentimental, philosophical, magical and simply highly entertaining. Plus, it does feel like Daniel and I have the same raison d’etre and humour towards life.

DANIEL: I’m always on the lookout for good indie works, especially those willing to swap books. I typically look for indie works who aren’t mainstream and are at least a little self-consciously literary. They’re hard to find.

I look for the same type of readers – not so mainstream, like to read literary stuff. They’re extremely hard to find on Goodreads and connect with because they’re typically not as social and a bit more guarded in how they make friends. They’re also a little less willing to take chances on indie writers.

Harry, what are your best & worst qualities as a writer and as a person?

HARRY: Oh, gee, I’m too self-deprecating to say what my best qualities are! I guess I’m compassionate and kind and stand against all forms of injustice. Yeah, I’ll go with that. And I suppose that my best quality as a writer is that I strive for originality, to write from the heart, and to stay true to myself.

My worst quality as a person is that I’m far too much of a typical Pisces who gets way too over-emotional about stuff all the time. Daniel would say that as a writer, I misuse semi-colons too much; and as a person; hm; maybe that I misuse; semi-colons; too much. 😉

Daniel, what are your best & worst qualities as a writer and as a person?

DANIEL: Humility. Persistence. I’ve used up all my patience of late. That used to be one of my virtues. Now, I’m suspicious of patience. I’m starting to think there is a virtue in knowing when to quit things early on.

Worst: Building scenes. Lack of description – what one author described as “killer diller details” that bring characters and places alive. (What kind of car would this kind of character drive? I don’t know. What does this character wear on casual Sundays? Don’t know. Not attentive enough. Even when I try to pay attention to these things in journaling, I can’t.)

[Harry would say my worst qualities are] over-writing while drafting. Under-editing in the post-production stage – just plain laziness in post-production.

The Newlywed Game for Collaborating Writers

CRISTEL: I would think that to collaborate on something like this, you’d have to be pretty in tune with one another, so to test that theory, I thought it’d be fun to kind of play the Newlywed game with these questions.

If he couldn’t write, what would Daniel do instead?

HARRY: I think if Daniel couldn’t write, he’d end up repetitively watching Farscape episodes back to back whilst constantly snapping pencils in half.

DANIEL: He would probably say [I’d be an] English Language instructor because that’s what I do. He might also say comedian. Or, straight man to a fat comedian in movies, like a Dan Aykroyd. Totally off.

Here are some [actual] possibilities:

Also, certain lead characters George Clooney has played remind me of myself            – the guy in Up in the Air (Professionally Firing People for a Living), Michael Clayton (Professional Fixer), Oceans 11 (Suave Con Man). These would all be ironic twist of fate jobs because I would hate every moment of them. (I’m probably forgetting some. I’d be surprised if he got any of those.)

If he couldn’t write, what would Harry do instead?

DANIEL: Harry would be a character in a Kevin Smith movie. My mental picture of Harry (because I’ve never actually seen him) is either Jay (from Jay and Silent Bob) or Randal Graves (from Clerks). Just, you know, the British version.

HARRY: Daniel would say I’d repetitively watch Monty Python episodes whilst smoking more than I already do, [but] if I couldn’t write, I think I’d lose my sanity, so I’d probably end up living in a padded cell eating crayons.
SCORE: ★★ (Movie Reference, mental/sanity).

If Daniel got a book deal for 2M dollars, what would he do?

HARRY: Hm, if Daniel struck it rich, I think he’d jack in the day job and spend more time writing stories and essays than he already does. Then he’d become even     more withdrawn from the world and become a bitter hermit, learning the lesson that money doesn’t buy happiness.

He would celebrate by forming a prog-rock-hillbilly-steampunk-funk-schwang band, with a chimpanzee on bass and Henry Winkler on fiddle, for a one-off performance on top of the Hollywood sign.

People always mistake success with virtue. I’m too studious to do so (at least             until I’m successful). So, I would not change any of my personal habits for at least a year or two (except for basics like health insurance and owning a house). I would also try to build systems for limiting hubris. I might entrust small portions of money with others in as a hedge against disaster.

If Harry got a book deal for 2M dollars, what would he do?

DANIEL: Go on a spiritual journey or invest in a retreat for reejectted writers. He might also put his money into a foundation for charitable giving.

Who curses more, Harry or Daniel?

HARRY: Within the realms of our written works, that would f***ing be me.

The moment of truth: would you collaborate again?

HARRY: Yeah, sure. We have some vague plans that will probably come to fruition, but we’ve both needed to take a bit of a break since writing ReejecttIIon and getting it out there. If we don’t end up doing another book, we’ll probably sell out and do some shitty sitcom.

DANIEL: Yeah. I’m trying to build a team around the next project – something I call “The Underground Novel.” Harry is one of the guys, but I’ve got one more person I want to recruit. That’s a little ways away, so I won’t say who. Eventually, I want to build a core for what will eventually be a kind of Monty Python of writing.

Thanks for playing (along) 😉 . I give your writing marriage six★s (no idea what the scale is, so we’ll just go with the 5 star rating system and say you exceed all possibilities!

What do you want readers to take away from ReejecttIIon II?

DANIEL: I want readers to get the sense that they’ve experienced something like the “Saturday Night Live” of literature (there was more of a focus on humor in this one). Some sketches hit, some sketches bomb, but it was an experience – one they want again. As a result, too, I want the readers to be interested in our longer works.

I also want readers who want a kind of writer who can do more than one thing. Is Daniel the horror-guy? Is he the suspense-guy? Is he the magical-realist guy? I want readers to get the sense that if we had to, either Harry or I could write anything.

CRISTEL: Thanks guys! If you haven’t read Daniel or Harry’s other works, check out the links below.

All six of Daniel’s books can be found at:
https://www.goodreads.com/author/show/1254945.Daniel_Clausen

Whitewolf’s five other books can be found at:
https://www.goodreads.com/author/show/7156759.Harry_Whitewolf?from_search=true

Like Loading...
« The Lights Went Out and Other Stories by Fiona Cooke Hogan- A Review
Route Number 11: Argentina, Angels & Alcohol, A Review »